Despite the Covid crisis, dressage competitions have been held throughout the US for the last six months with surprisingly steady rider attendance. Competitors felt the need to escape the grim reality of the pandemic while continuing the development of each horse’s talent. The USDF Regional Finals were also well attended, with competitors happy to return to a semblance of normalcy. While canceling the US Dressage Finals may not have been a popular decision, it was certainly a responsible one.

For many licensed officials, the process of traveling and officiating at shows across the country was sometimes both challenging and daunting. I’d like to share some experiences and observations from a show season which began quite normally and ended as anything but normal. Many of you participated as competitors this year. Let me share what it was like to officiate at these events from the other side of the judge’s stand. 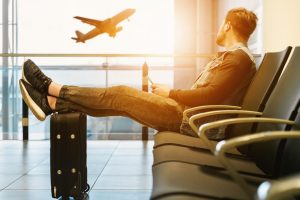 Once USEF allowed regular competitions to proceed, officials had to decide whether to travel to areas geographically removed from home- base. Some judges refused to officiate at locations requiring air transportation and would only drive to shows. Others decided to sit out the competition year completely. Given the risks, these were entirely responsible decisions. Weighing the inherent risks caused these officials to conclude that until a falling of the infection rates occurred paired with an available vaccine, staying at home was the only option.

Others were willing to assume the risks and fly to competitions throughout the US. I was one of these.

Those doing so traveled with masks and eye shields to lessen the risk of infection while in airports. Terminals will fewer passengers allowed us more space at the gates to remain socially distant. Food and drinks were less available, some terminals closed food service at 5 pm and choices were quite limited. Do remember that one does not frequent any airport seeking fine dining.

Once on board a flight, hand sanitizers were distributed to permit passengers to disinfect their hands and seat areas. Snack packages were the only consumables distributed on flights. Many declined the packages to avoid removing face masks mandated on all flights. On my flights (Delta and Southwest), middle seats remained unsold. So long as this was the case, my comfort level in flying remained high. While a bit more demanding of individual safety awareness, these travel considerations were still quite manageable.

Competition Covid protocol varied widely throughout this six-month period. Competition management had to determine safety measures without too much guidance, but always seemed to implement safeguards generously and without too much difficulty. Curiously, the priority from USEF was the Waivers of Liability which were to be completed and signed without exception by all participating in competitions.

For those entering the showgrounds, temperatures were fairly consistently collected by show personnel. Once taken, wrist bands were issued to designate those whose processed and logged in. In many cases, the temperatures recorded were well under 98.6 degrees (calibration of the devices was suspect at times!). I was alarmed to find that each day at one competition, my temperature was lower each day by as much as a half degree! I wondered if rigor mortis would be my condition on the final show day (happily it was not).

Isolation within the judging stands was highly variable. Judges and scribes were usually separated by a plexiglass barrier or distanced by at least 6 feet of space (or both). That fact rarely varied. Facemasks were required at all times during competition and (in my experience) strictly enforced. I heard that some judges were less than happy with this requirement and could be somewhat uncooperative at wearing the mask especially in the heat of the day. At one USDF Regional Final, the TD in charge had a 6-foot measure and would periodically ‘spot- check’ distances between judges and scribes.

With the sudden pandemic, requirements to protect participants were perhaps stringent and overly cautious in the beginning. However once experience at the competitions could be used to guide policy, changes could made when the need for modifications were apparent. For example, USEF mandated a plexiglass sheet to cover the front of the judging stand between the judge and rider. The practicality of this requirement was called into question at one Regional Final when the sun’s reflection made it impossible for the judges to view the rides. It also caused the horses to shy at the sunlight’s reflection. This experience highlighted the impracticality of this requirement- it was soon dropped.

The USEF requirement for food and beverages on the showgrounds was lifted, although many show managers provided this on a complimentary basis. Competitors were most appreciative. Judges look forward to socializing in the evening over dinner. Limited restaurant dining impacted this practice. Frequently Grubhub or Uber-Eats was the only option.

This show year has been a huge education for officials, show management and exhibitors alike. Many modifications were made as one- time exemptions this year. A good example is the requirement to open and close the arena opening at Regional Finals. This experience may cause this long-standing requirement to be relaxed in the future.

Overall, great flexibility was exhibited by everyone during this competition season while honoring the safety requirements imposed by the virus. Generally, it showed the best in sportsmanship by most everyone in dealing with challenging conditions. We should maintain this positive ‘can do’ attitude once the pandemic is just a distant memory.